In my first post I covered some of the methods organizations use to enforce a naming standard for groups, such as Active Directory groups, that are used to authorize access to data.  I also covered the challenges that are introduced when a mechanism for enforcing the naming standard doesn’t exist or isn’t effective and how this problem is becoming more prevalent with the increase in consumption of software-as-a-service applications.

Office 365 Groups are a core foundational component of Office 365 helping to enable simple, fast, and efficient collaboration within an organization.  For an organization to take full advantage of this, its end users need to be empowered to spin up Office 365 groups for mail-based collaboration or create new Teams for real-time collaboration. To make this work, IT can’t get in the way of the business and needs to let the business spin up and down Office 365 Groups as it needs them.  Microsoft has introduced a number of solutions to help with this including group expiration, integration with Office 365 retention policies, and the feature I’ll cover today, naming policies.

The naming policy feature is still in private preview but today I’m going to show you how to test the feature in your own tenant.  As a point of reference, I’m using a set of trial O365 E5 and Azure AD Premium P2 licenses within the commercial offering of Office 365 for my testing.  I can’t speak to whether or not the instructions below will work for Office 365 GCC or Office 365 Government.

Comparing the modules using a get-command shows that the preview module has the new cmdlets below.

After connection to Azure AD using the Connect-AzureAD cmdlet, I can take a look at the templates available. The template I’m interested in for this blog is the Group.Unified template because it contains the settings for the naming policy as seen below.

If I run a Get-Member on $setting I can see that I’ve created a new instance of the directorySetting resource type which has the settings inherited from the Group.Unified template with some of those settings being configured with default values. 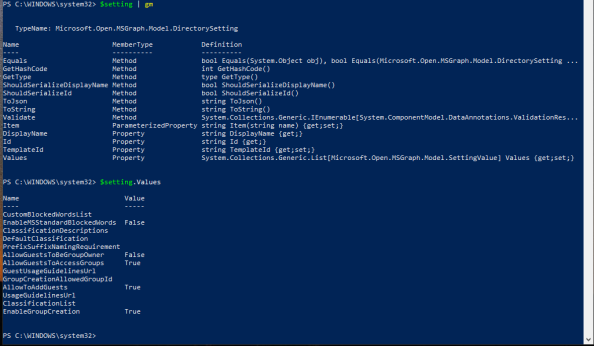 You’ll want to pay attention to these default values because once the settings become active for the tenant and seem to override settings configured within the GUI.  For example, if you are denying users the ability to create new Office 365 groups via the configuration setting in the Azure Active Directory blade in the Azure Portal, leaving the EnableGroupCreation setting as true will override that.  I’m not sure that is the intended behavior, but hey this is still preview right?

The next step is to configure the PrefixSuffixNamingRequirement setting with the naming convention I want enforced across my tenant.  This Microsoft article does a good job explaining your options and the syntax.  I went with a simple naming convention of including the fixed string “JOG” along with the value from the user’s department attribute in Azure Active Directory followed by the string value the user chooses for the group name.

Checking the values property of the $setting shows that the PrefixSuffixNamingRequirement is now populated with the value I entered above.

Now that the settings has been configured I make it active by using the New-AzureADDirectorySetting cmdlet and including the $setting directory object as input.

I then log into the Office 365 portal as a standard user and navigate to Outlook Web App and attempt to create a new Office 365 group. All new groups are now created using the naming convention I defined and it’s displayed clearly to the end users. 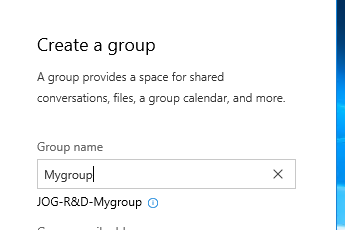 Hopefully Microsoft will refine the documentation as the feature moves out of preview and into general availability.  I also think this is a simple and static setting that would make sense to configurable from the GUI.  I’d also like to see the settings configurable with the directorySetting resource type be in sync with any corresponding settings in the GUI to avoid confusion.

That’s all there is to it.  Overall it’s a very simple yet elegant solution that solves naming convention woes while giving the business freedom to collaborate without having to go through IT.  You can’t beat that.